Our Time In Tangier |(Tanger) Morocco.

Us on the water front In Tangier! 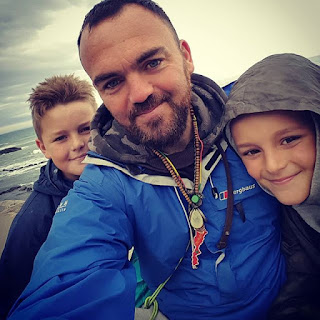 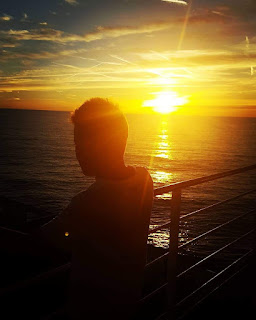 So we arrived In the port some five hours late, early hours with no cash on me and soon came to realize we were at the new port some distance away from the old port we thought we was getting off at, with a ten minute walk to our night in a hotel which was now going to be a morning In a hotel for just the free breakfast before I had to plan our next move to find a camp I'd heard of? Right first thing Is let's get off this ferry pray for a cash machine and get a taxi to the hotel. Cash machine was there and a short walk out of port was the taxis. Three guy's approached and I'd all ready had enough by this time and was tired, so tired that I was beyond working out that 600 dh they wanted for the 40 minute journey was actually not that bad but I was tired and In no mood so I paid 300 dh when arriving at hotel, later to feel like I'd ripped them off? And people warn you about Moroccan taxi driver's? Oppppppps!!!!
300 dh later we are outside the hotel at around 6am and it's raining hard. The porter answered quick enough and I said we have a booking for last night but we are late. He looked a bit puzzled but showed us to our room. Soon to realize they were setting up for breakfast at this time I said can we eat? And we did. Lot's of food and drinks before we headed back to the room and fell asleep. Me and the boy's completely worn out on the travelling life. My thought was fuck Morocco. I was exhausted. I woke some hours later with now one hour to leave hotel and the boy's were still flat out asleep so I went downstairs and came across another porter who couldn't do enough for me. I was soon the happy traveller again loving life. When I asked him had he heard of Camping Miramontie his reply was yes but went onto tell me It may not be open. Shall I ring for you? I like this guy. After a few numbers and some repeated calling we got a yes. I woke boy's we headed back down with the gear. Porter ran outside called over a taxi and 20 dh about £1.60 got us to Camping Miramontie In the oldest Mercedies taxi I'd ever been In.
Setting up In Camping Miramontie 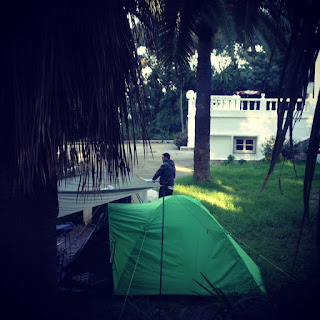 Within minutes of meeting our now new friend Ahamad at the slightly falling down double metal gates of the camp I knew I was liking this new found home of ours. Hey come In make yourself at home, camp where you want? Just you and the boy's? Yeah? Cool, a few handshakes later and a price of 40 dh a night, under £4 we were happy and we could hear and see the ocean. Perfect. First thing I noticed was the big green, awesome looking truck parked up, so we camped just across from it, In at some point hoping to meet the big green truck driver. Set-up was quick. Tent & tarp up we went to explore with the hotel at the top of the camp In our mind as there was a pool, three of them we could use for a small price as somehow It was connected to the camp. Up top was amazing. Pools were there, cafe/restaurant and a amazing view of the ocean. We will be back.
The hotel up top from the camp. 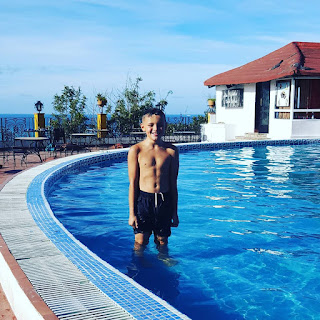 Turns out that camping here was a great choice on our part. It was so basic It was perfect. Couple of showers, a few sinks to do some washing of pot's and pans and clothes. And we later was told that we could use the small kitchen to cook and eat. A small gas bottle and ring was free to use for all us tent/tarp people which later I replaced the gas bottle. 50 dh (£4 approx) amazing value. This place was the closet camp to the port and good value so we met a awesome bunch of people every few days be it guy's with moto homes, moto bike guy's and many who were making there way down South via jeeps, trucks and all kinds. Walk out of the camp and go left Is the beach all the way into the old town. Great markets and cafe's here. Everything you could need was close and If you made a right you could find a supermarket/shopping centre within 15 minutes walk. We had a great time and as always made some great friends.
Water carried by Jacy back to camp. 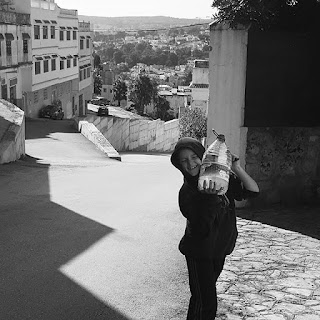 The hotel and pool up top from the camp 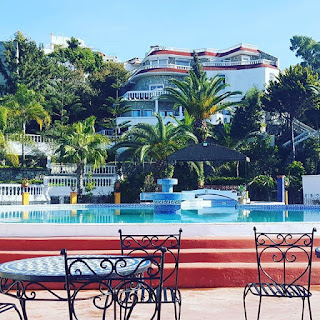 Father and son at the hotel 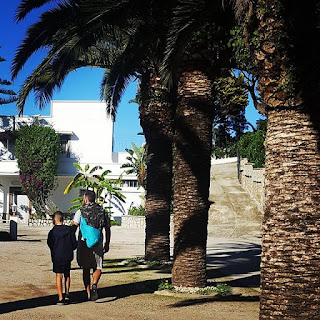 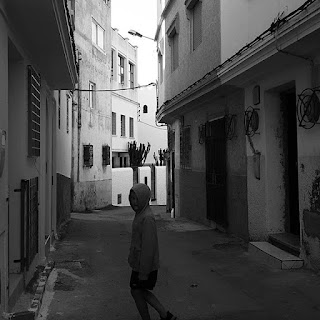 One of three slides. 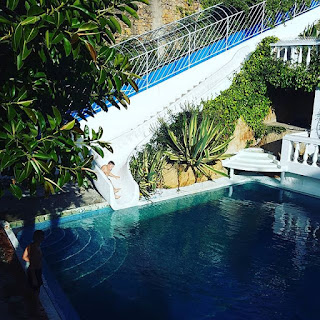 The Italian dog on site. 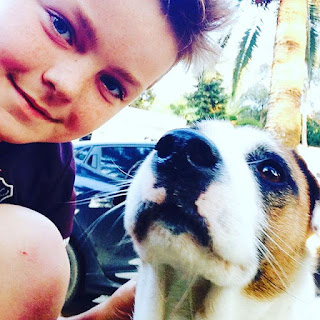 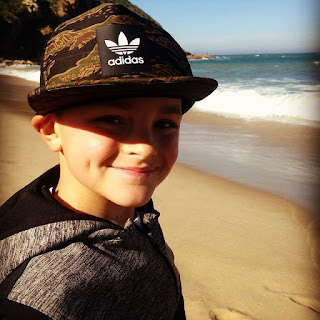